Lyn Stanley’s debut recording Lost In Romance (released Nov. 2013) was in the #1 slot for independent jazz singers on CD Baby. Her second CD Potions {from the 50s} has also been the #1 Top Selling Vocal album on CD Baby.com and both albums have been identified as Audio Reference Discs. Lyn Stanley has become a darling of audiophiles, critics and lovers of classic American songs, selling 16,000 albums in the past year on her own label. Audiophile’s vinyl critic Michael Fremer calls her “Chanteuse Extraordinaire.” The very appealing performer has achieved all of this by performing the music she loves, going first class in every way, and developing into a major singer.

Lyn Stanley has a very warm voice that conveys emotions simply, caresses each word that she interprets, and conveys a deep understanding of the lyrics. As with the best singers, she makes every note and sound count and is full of subtle creativity. Her newest recording, Interludes, is Lyn Stanley’s latest accomplishment. The project features an all-star cast of jazz greats including pianists Bill Cunliffe and Mike Garson, guitarist John Chiodini, bassist Chuck Berghofer, and drummers Ray Brinker and Paul Kreibich, plus memorable guest appearances by trombonist Bob McChesney, Hendrik Meurkens on harmonica, cellist Cecilia Tsan (who trained with the same teacher as Yo-Yo Ma) and percussionist Brad Dutz. The blend between the singer, her rhythm sections and the harmonica, cello and trombone on various selections is beautifully arranged by Steve Rawlins, Bill Cunliffe, Tamir Hendelman, John Chiodini and the singer herself.

Lyn Stanley performs 14 of her favorite songs on Interludes, classics whose lyrics she fully understands, dealing with Break Ups, Make Ups and all of the stages of romance. She starts out Interludes in dramatic fashion by singing a capella on “How Long Has This Been Going On” before being joined by the other musicians. A very creative version of ”Just One Of Those Things” has her engaging in brief duets with each of the members of her rhythm section and sounding very relaxed even with the tempo changes. Among the other highlights are Ms. Stanley’s wordless ensemble vocalizing during part of “More Than You Know,” the atmospheric “Boulevard Of Broken Dreams,” an eerie “Last Tango In Paris,” the transformation of  “Don’t Explain” into a samba, a quietly expressive “The Island,” her saucy singing on “I Was Little Too Lonely (and You Were A Little Too Late),” and a version of “I’m A Fool To Want You” (a duet with guitarist Chiodini) that is filled with longing. On each selection, Lyn Stanley brings out the beauty of the rich melodies and its timeless lyrics.

One of the most remarkable aspects of Lyn Stanley’s musical career has been that she has been singing for less than five years. How did she come this far so fast without the backing of a record company, high-powered booking agents, a manager or connections?

Ms. Stanley had already had success in several fields when in 2005 she began to realize a lifelong dream and started training as a ballroom dancer. She overcame injuries from a terrible car accident through sheer determination, becoming a national champion ballroom dancer, winning three Pro/Am USA ballroom titles in 2010, and placing third in a World title Pro/Am event. In 2010, after seeing the great veteran pianist Paul Smith performing at a concert, Lyn met him backstage along with his wife, the widely respected vocal coach Annette Warren. Although she had never sung previously, Lyn’s natural talent was obvious from the first note as was her ability to add warmth, sensitivity and a solid sense of swing to the lyrics that she interpreted Paul Smith and Annette Warren became her mentors.

Within four months, Lyn Stanley was singing in public and was already on her way to a successful singing career. Her debut recording Lost In Romance was the #1 selling album on DownloadsNOW.net and ranked in the top 100 albums played by radio stations across the United States. Her second album Potions {from the 50s} is available as a SACD stereo hybrid, as downloads on CDBaby.com, and also as a 180 gram double-45 RPM vinyl album, a reel-to-reel tape (a 1/4 inch 15ips tape album made by Bernie Grundman) and a vinyl record for audiophiles. Potions {from the 50s}, which has been identified as an Audiophile Reference Disc by four audio hi end system designers and as Album of the Month in German publication Audio for Feb. 2015, has been called “superb” by HiFi News. Lyn has also made a very strong impression in her live performances including at Vitello’s in Los Angeles and New York’s Metropolitan Room.

More than just a wonderful singer who has become internationally famous, Lyn Stanley uses all of her business skills and knowledge to create recordings that are memorable and highly enjoyable, reaching out to a wide audience while retaining her dedication to the Great American Songbook and swinging jazz. Interludes is her latest accomplishment.

“Specializing in Media Campaigns for the music community, 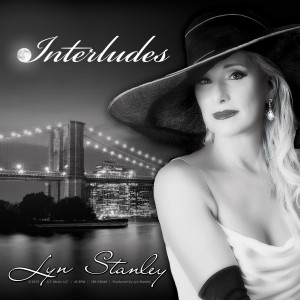