About Outside In: A Novel

Shawn is a hard-luck saxophonist with an unearthly muse. His demented neighbors, a mob boss and a choir of interdimensional aliens with sharp teeth are not the only things that stand between Shawn and jazz stardom. A bigger problem is no one likes his crazy music. Worst of all, it scares off Carole, the woman he loves more than anyone. It even scares himself because he knows one day he’ll follow his reckless muse until he goes insane, and Carole will stay away forever. When his soul collides with reality, Shawn must choose between his art and his love.

About Scott Shachter
Scott Shachter has been playing his flutes, clarinets and saxophones on Broadway since 1988. He’s performed in nearly seventy shows, including Pippin, Kinky Boots, Chicago, Cinderella, Newsies, Porgy and Bess, Billy Elliot, A Chorus Line, 42nd Street, Assassins, Gypsy, and Phantom. His versatility with styles and instruments has enabled him to perform with groups ranging from the American Symphony to Manhattan Transfer.
Through it all Scott has been a storyteller. OUTSIDE IN, his first novel, was inspired by his encounters with immensely talented performers who seemed unable to relate to anyone, as if they were separate life forms. This jazz fiction comedy puts the reader inside the wacky life of a working class musician, and explores the “crazy genius” in us all. OUTSIDE IN is a finalist in the 2014 Next Generation Indie Book Awards. It also reached the quarterfinals in the 2011 Amazon Breakthrough Novel Award and received Honorable Mention in the 2011 Leapfrog Press Fiction Contest.
Artist: Scott Shachter
Title: "Outside In: A Novel "
Label: (StarBeat Press)
Artist Website: scottshachter.com
Release Date: 2014/06/03 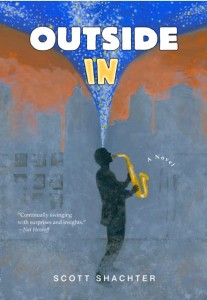