Tapping into “Taps”
A century and a half ago, two battle-weary Civil War soldiers wrote the famous bugle call.
By MARC MYERS 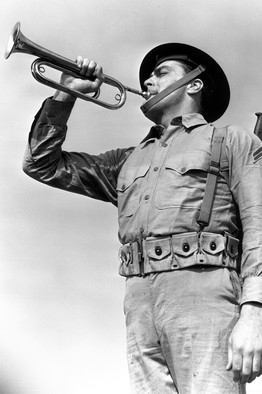 On Saturday, Armed Forces Day, 200 buglers will fan out among the graves at Arlington National Cemetery to sound “Taps” simultaneously at noon.

Like many great American songs, “Taps” had two composers—one with musical chops, the other with a big idea. Fortunately for the bugle call’s place in history, the musician let his more powerful collaborator spread the word, and the 24-note song survived and flourished.

On Saturday, Armed Forces Day, 200 buglers will fan out among the graves at Arlington National Cemetery to sound “Taps” simultaneously at noon. The event marks the start of a series of tributes honoring the 150th anniversary of the elegiac song originally composed in July 1862 during the Civil War.

While the exact date isn’t known, correspondence by those involved indicates it was shortly after the Seven Days Battles, which ended on July 1, said Jari Villanueva, a “Taps” historian and former Arlington bugler.

Back then, as the Union Army rested at Harrison’s Landing, Va., following a grueling victory, Maj. Gen. Daniel Butterfield grew weary of “Extinguish Lights” —the French bugle call used to mark evening turn-in. “Butterfield found it too formal and wanted a softer, more melodious call,” said Mr. Villanueva, who will play Saturday both at Arlington and at Union College in Schenectady, N.Y., from which Butterfield graduated in 1849.

In his tent, Butterfield jotted musical notes on the back of an envelope. The melody he had in mind was based on an old “Tattoo”—a rigid bugle call that summoned soldiers for the day’s last roll call. But Butterfield needed to hear what he had written.

Enter Pvt. Oliver Willcox Norton, a bugler under Butterfield’s command. As Norton wrote in a letter to “Century” magazine in 1898: “[Butterfield] asked me to sound [the notes] on my bugle. I did this several times, playing the music as written. He changed it somewhat, lengthening some notes and shortening others, but retaining the melody as he first gave it to me.”

Once played in camp, the new call spread quickly among neighboring brigades—thanks to its tranquil theme and Butterfield’s clout. But the catchy melody did not replace “Extinguish Lights” until 1874, when military manuals were updated.

Even then, Butterfield and Norton’s melody continued to be known as “Extinguish Lights” in manuals until 1891, when “Taps” finally became its official name. “Soldiers then had always referred to the last call as ‘Taps’ because at the end of ‘Extinguish Lights’ there were three loud taps of a snare drum,” Mr. Villanueva said.

Listen to a classic rendition of “Taps,” and watch videos related to “Taps,” including songs by Benny Golson, Jimi Hendrix and more.

In the decades that followed, as bugle calls played less of a battlefield role, the dusky theme was shifted to wreath ceremonies, memorials and solders’ funerals.

“Lyrics were written repeatedly over the years for “Taps,” but by the early 1920s, the words for what is now known as ‘Day Is Done’ were in place,” Mr. Villanueva said.

Taps also turned up in popular music, including rock. Army veteran Jimi Hendrix quoted “Taps” during his guitar performance of the “Star-Spangled Banner” at Woodstock in 1969. Alternative rock band The Flaming Lips used “Taps” during live performances on tour in 2009 and 2010 as an anti-war statement.

In jazz, Benny Golson’s “I Remember Clifford”—written in 1956 shortly after Mr. Golson’s friend and trumpeter Clifford Brown died in an auto accident—evokes the spirit of “Taps,” even if it doesn’t quote from it directly. Trumpeters Lee Morgan, Art Farmer and Dizzy Gillespie all recorded memorable renditions of the song.

“Bugle calls, in general, became common themes in popular music before and during both World Wars,” said jazz historian Dan Morgenstern. “‘Over There,’ ‘Bugle Call Rag’ and ‘Boogie Woogie Bugle Boy’ are just three that come to mind.”

When Butterfield died in 1901, he was buried at West Point, and “Taps” was played at his funeral. As for Norton, he went on to a career in business, eventually co-founding the American Can Co. “Norton was essential to “Taps,” but I think he realized early on that all great ideas need highly visible champions to succeed,” Mr. Villanueva said.

A version of this article appeared May 18, 2012, on page D4 in the U.S. edition of The Wall Street Journal, with the headline: musicThe Short List.

He has helped me with everything from advertising gigs, setting up ads, contact information, contacting labels and media, producing my own CDs, distribution, and other invaluable advice. His passion for what he does helps keep me on a positive attitude when the business side of things seems bleak at times.

I am quite sure I would not have been able to achieve the success that I have over the last 13 years if it wasn’t for the expertise, hard work, and guidance of Jim Eigo and Jazz Promo Services.